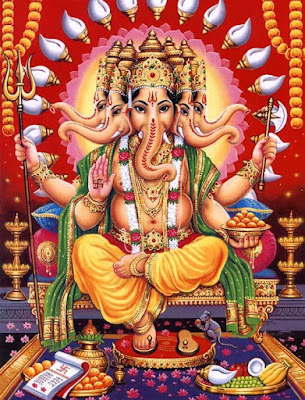 Namaste everyone on this blessed first day of Ganesh Chaturthi - the 10-day festival celebrating Lord Ganesha's birthday.
Those of you who read this blog regularly already know that a very large portion of my personal spiritual path comes from Hinduism, and that the elephant-headed Lord Ganapati and I share a close relationship. He is an extremely wonderful Divine spirit to have a strong connection to, as he serves the roll as Remover of Obstacles and Opener of the Ways. He has the power to clear one's path to any goal, and so is closely linked to spiritual works aimed at increasing one's success, and gaining good luck and good fortune. He is also a wonderful spiritual guide who will help you find whatever you need to get to the next stage of your spiritual development - even if it is something outside of the Hindu tradition.
One of his duties in Hinduism is to aid the seeker in connecting with the other Deities, and so he is always acknowledged at the beginning of any ritual because without his assistance one cannot gain the favor and help from other Hindu gods and goddesses. He is also the Lord of Karma and can aid one working through issues that are rooted in past lives.
However, even with all these important duties and titles, Ganesha is a very joyful and compassionate Divinity who is a great deal of fun to have around! He has a very playful spirit, and many people experience a light-hearted trickster aspect in his personality through their interactions. He is very beneficient and easy to please, and he enjoys any earnest attempts to make a connection with him and will quickly bestow blessings upon those who make the effort.
In conjure and rootwork, those who do honor Ganesha generally go to him for Road Opening work - which directly corresponds to his role as Lord of Obstacles. He is also approached for aid in financial increase, success, and good fortune, but he really is an extremely powerful ally in nearly any type of work that you can imagine. He can bring about swift healing, and guide you to a new suitable romantic partner. Because of his duty to make the connection between the devotee and other deities, he makes a fantastic deity to petition alongside another to help keep the road open to the manifestation of their powers in your life. For example, Ganesha is very commonly petitioned alongside Lakshmi for financial prosperity. But he makes a fantastic spiritual partner with Saraswati for academic and artistic success as well! In reality, there is nothing that Ganesha cannot help you with, and there is a sect that worships him exclusively and sees him as the Ultimate Godhead.
Ganesha Chaturthi is the 10-day birthday celebration for Ganesh, and those wishing to develop and maintain a strong relationship with him generally recognize the festival in whatever capacity that makes sense for them and their resources.
Traditionally, Ganesha Chaturthi is celebrated with great pomp and circumstance. In the weeks leading up to the festival, clay statues are created of Ganesha which temples, community stores, and householders purchase and enthusiastically decorate. (The statues are all immersed in to the waters of a sacred river on the 11th day, and so are not fired or sealed in any way so that they remain dissolvable.) These statues become the central focus of the festival, receiving worship and offerings each day of Ganesh Chaturthi, and generally being celebrated with much gusto. Towns and villages will have contests for the best decorated Ganesha statue, and parades and parties will be held with lots of music and dancing. Ganesha's presence is considered to be very close and palpable during the event, and reveling in his close energy is spiritually rejuvenating! At the end of the festival, all the statues are ritually walked down to a river and immersed, signaling the end of the festival and dispersal of Lord Ganesha's influence back into the cosmos as a whole.
For a really adorable depiction of what one devotee imagines goes on at the bottom of the river as those Ganesha murtis are immersed, view this fantastic and fun video:

While there are all kinds of traditional expectations as far as what offerings are offered on what day of the festival, those outside of the Hindu tradition can feel secure in offering what they are able for Ganesha Chaturthi. He is particularly fond of coconuts and sweets, so those will always go over well with him. Here at my home I have a modest Ganesha altar that is part of my larger household prosperity altar, and so I move things around to make him the center feature. Since my marigolds are blooming, and they are one of the flowers that are often used to craft ceremonial garlands that decorate honored deities and spiritual leaders, I strung some of the best blossoms together and hung them around his statue. I will keep a light burning in his honor for the entire 10 days, and so decorated the glass of a vigil candle with the AUM symbol (which Ganesha is considered to be an embodiment of) in some bright colors. I burn sandalwood incense several times daily, offering them with prayers each time, and I spend some time chanting his mantra with no other intent than to honor him and feel his presence. Each day I also make an offering of water, and some form of food offering. Today it is a coconut, the following days it will be fruit and sweets. I make a point to play bhajans and other devotional music that is dedicated to Ganesha all day throughout my home (gotta love the iPod playlist feature for this). 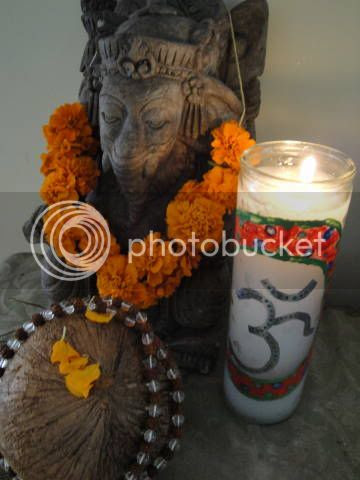 It's not much. It doesn't look as bright and as fancy as I know he deserves, but it is the best that I can do without having a more traditional shrine space dedicated exclusively to him. It is definitely something that is on my spiritual wish-list, and has been for years. I know that when the time is right, the means to make it happen will present itself and so I remain patient and show my devotion in the best way I can. And you can honor him, too!
At Hinduism.About.Com we find these simple suggestions for observing Ganesha Chaturthi at home:
On the Ganesh Chaturthi day, meditate on the stories connected with Lord Ganesha early in the morning, during the Brahmamuhurta period. Then, after taking a bath, go to the temple and do the prayers of Lord Ganesha. Offer Him some coconut and sweet pudding. Pray with faith and devotion that He may remove all the obstacles that you experience on the spiritual path.
Worship Him at home, too. You can get the assistance of a pundit. Have an image of Lord Ganesha in your house. Feel His Presence in it.
Don’t forget not to look at the moon on that day; remember that it behaved unbecomingly towards the Lord. This really means avoid the company of all those who have no faith in God, and who deride God, your Guru and religion, from this very day.
Take fresh spiritual resolves and pray to Lord Ganesha for inner spiritual strength to attain success in all your undertakings.
May the blessings of Sri Ganesha be upon you all! May He remove all the obstacles that stand in your spiritual path! May He bestow on you all material prosperity as well as liberation!
If you wish to learn more about Ganesha, his mythology, his worship, and his mantras that you can use for meditation and devotion, one of the best resources, Loving Ganesa, can be found online for free at the Himalayan Academy. If you'd like to read it in its entirety you can here:
http://www.himalayanacademy.com/resources/books/lg/lg_table_of_contents.html
Lord Ganesha has been an invaluable guide and friend for nearly a decade now. I can't imagine my spiritual life without him and I am extremely grateful to have his presence near me each day. I look forward to Ganesh Chaturthi each year, and the fact that my own birthday falls very near to it makes it all the more special.
Here's a short video showing Ganesh Chaturthi festivities in India. Enjoy!
(Also, my apologies for the ad before the video, I couldn't find a good one that didn't have this.)

Devi Spring
Devi Spring has been practicing folk magic since 1997. With academic learning and practical experience in many different areas of world spiritual and folk magic traditions, she began offering divination and ritual work professionally to clients in 2008. She is the proprietress of Queen of Pentacles Conjure where she provides tarot readings, spiritual consultations, candle services, and a variety of custom crafted items such as mojo bags, bottle spells, and more.

She holds a Religious Studies, B.A. and is also a Usui Reiki Master-Teacher with an established healing and teaching practice in Toronto.

Devi has trained in many different forms of folk magic,and takes inspiration from traditions tied to her own heritage and those she has received initiation in. This has resulted in a unique and syncretic melange of hoodoo, Mexican folk religion, New Orleans conjure, universalist and folk expressions of Hinduism, Hermetic ceremonialism, and folk shamanic spirit-work paving her path.